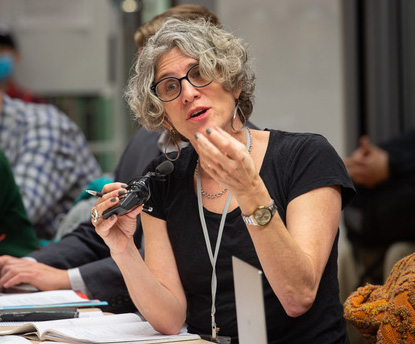 Dr. Alexandra Juhasz is Distinguished Professor of the Film at Brooklyn College, CUNY. She makes and studies committed media practices that contribute to political change and individual and community growth.

Dr. Juhasz is also the producer of educational videotapes on feminist issues from AIDS to teen pregnancy. She has directed the feature documentaries SCALE: Measuring Might in the Media Age (2008), Video Remains (2005), Dear Gabe (2003) and Women of Vision: 18 Histories in Feminist Film and Video (1998), and the shorts RELEASED: 5 Short Videos about Women and Film (2000) and Naming Prairie (2001), a Sundance Film Festival, 2002, official selection.

She is the producer of the feature films The Watermelon Woman (Cheryl Dunye, 1997) and The Owls (Dunye, 2010).

She and Anne Balsamo were the first co-facilitators of the network, FemTechNet, which debuted its feminist rethinking of a MOOC, a Distributed Online Open Course in 2013. The “Dialogues in Feminist Technology” project continues at femtechnet.org.

Her current work is on COVID and AIDS, fake news, online feminist pedagogy, and other more radical uses of digital media. Some of her work in critical digital studies and community is happening at fakenews-poetry.org,  #100hardtruths-#fakenews and ev-ent-anglement.com.