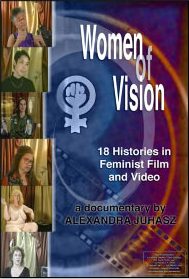 Purchase the film at cinemaguild.com.

Women of Vision highlights 18 women and covers a period of time from the 50’s to the 90’s. The women chosen were selected because they represent the real diversity within both feminism and independent film and video. They range in age from 65 to 25. They are black, white, Puerto Rican, Yugoslavian, Asian American, biracial. They are straight, gay and bisexual. What they share is a need to express their own interpretations of what American culture is and could be and a belief that this work is made particularly powerful through the media.

Women of Vision is a companion piece to Juhasz’s 1998 documentary of the same name. The book presents the complete interviews, allowing readers to hear directly the voices of these articulate, passionate women in an interactive remembering of feminist media history. Juhasz’s introduction provides a historical, theoretical, and aesthetic context for the interviews.

All interview tapes for this project are archived at the Outfest UCLA Legacy Project for research.

The NYC research tape (4 hours of conversation with 50+ media feminists in the 1990s) is being reactivated through the VHS Archives Working Group.

All of the research tapes, interviewing hundreds of media feminists in the 1990s (NY, Chicago, Philadelphia, San Francisco, Los Angeles) are available from the artist on request, for research and activation.