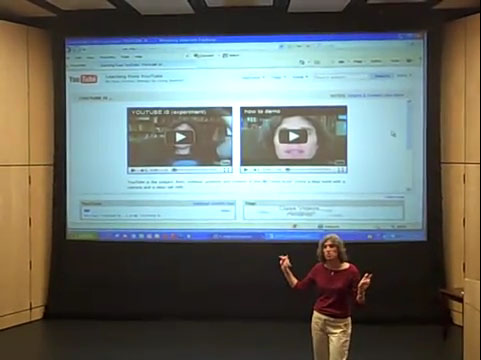 Learning from YouTube originated as a course taught by Dr. Juhasz at Pitzer College beginning in 2007.

All class assignments and homework for the course were created as videos and posted on YouTube and were open to the public. The course received a flurry of media attention and answered the question“What can YouTube teach us?”

YouTube, the largest video sharing site in the world, is viewed by more than two billion people per day, nearly double the prime time audience of all three major US broadcast networks combined. YouTube widely promotes that its technology enables the democratic production and distribution of media content on this huge scale. So why is YouTube being used primarily to spoof mainstream media forms and what does this tell us about social media and our society?

The MIT Press, in partnership with the Alliance for Networking Visual Culture, has just published Learning from YouTube (MIT Press, February 2011), by Alexandra Juhasz, Professor of Media Studies at Pitzer College in Claremont, California. YouTube is the subject, form, method, problem, and solution of her video-book: an online inquiry into today’s media. This is not your typical scholarly book (Learning from YouTube can never go to paper) Juhasz writes about social media inside and through it.

This video-book contains a series of more than 200 texts and videos –“texteos” – that encourage users to think about YouTube by experiencing and learning within this digital entertainment platform. Whether in video or textual form, Juhasz writes in a relatively informal voice suitable to her subject and the online digital format of the project permits contributions from its users.

Some of the lessons that Juhasz uncovers in Learning from YouTube are:

“Media scholars must be able to work within and communicate in the media they study, which often takes them outside traditional print forms of scholarship,” said Ellen W. Faran, Director of the MIT Press. “We believe that Alexandra Juhasz’s video-book is an important step forward in the exploration of new forms of credentialed university press scholarship.” Learning from YouTube was selected by the Press for its publishing list after an extensive peer-review process adapted to include the video-book form.

The video-book was created in partnership with the Alliance for Networking Visual Culture with design by Craig Dietrich, and was funded by the Andrew W. Mellon Foundation.

About the MIT Press
One of the most respected university presses in the world, the MIT Press is known for quality, innovation, and distinctive design. It publishes, in print and electronic form, about 200 new books a year and more than 30 journals. The Press publishes in selected diverse fields including art and architecture; cognitive science; computer science; economics; neuroscience; and new media. It is noted for its commitment to emerging fields of scholarship, its international outreach, and for its pioneering of digital projects.

video-book
Published in 2011, by MIT Press