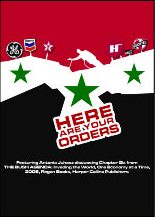 Produced and directed by Alexandra Juhasz, this short video illustrates a lecture given by Antonia Juhasz on the third anniversary of the Iraq War. Juhasz explains the careful economic and political re-structuring of Iraq through the 100 Bremer Orders put into place during and after the occupation by L. Paul Bremer, head of the Coalition Provisional Authority.

Introduces audience to Chapter 2 of The Bush Agenda: Invading the World One Economy at a Time, Antonia Juhasz (NY: Reagen Books, 2006).

To order a copy of Here Are Your Orders on dvd please contact Alexandra.Juhasz@brooklyn.cuny.edu