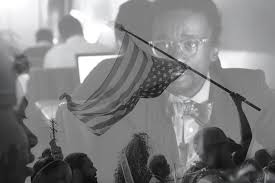 Perpetual Revolution, currently at the ICP, makes powerful use of the museum’s walls, paint, institutional power, and curatorial competencies, to create a holding environment for images of social change. Organized around six “critical issues transformed by visual culture: #BlackLivesMatter, gender fluidity, climate change, terrorist propaganda, the right-wing fringe and the 2016 election, and the refugee crisis”—the show argues that artists and activists have used machine-rendered images as part of these revolutionary struggles since the invention of the camera.

International Center of Photography January 27 – May 7, 2017